Home › book review › Book Review – Where Dragonflies Dance by A. A. Medina

Book Review – Where Dragonflies Dance by A. A. Medina 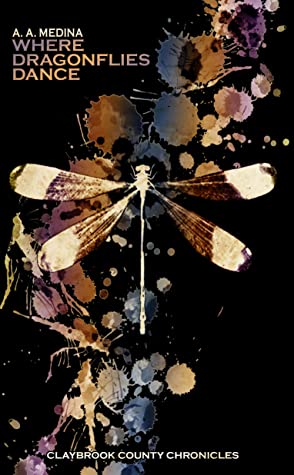 Man, this is one dark book. Although should I have expected anything less? A. A. Medina’s novella, Siphon is a book to be read through gnarled fingers, such is the graphic nature of many of its scenes. So this second instalment (though not a sequel) in the the Claybrook County Chronicles was always going to be nasty.

Before reading I had perused a few reviews of this book and many said the same thing; this is very different to Siphon. And here’s another review agreeing with this sentiment. It’s different in tone but not in its atmosphere of darkness and foreboding.

Erik is a dude recently involved in a nasty car accident. OK it was a little more than ‘nasty’. He lost a limb which is never a good outcome. But worse still, he lost his daughter. Not that she’s dead, well she might be as Erik can’t remember anything after his accident, but she’s missing and although police are working around the clock to find her (apparently) there seem to be no leads.

Erik is suffering in the way any father would be. This tragedy that is now his life is really taking its toll on his marriage. His wife appears to be having an affair which seems terrible, to be begin with anyway.

As this novella unfolds, Erik, along with the reader, begins to remember what happened to him and his daughter. Whether he is remembering as the story thunders along or whether he always knew and neglected to give all the details to begin with, is possibly up for debate.

But worry not, you do eventually find out exactly what happened, although you may wish you never did.

Things take a dramatic turn into Darksville towards the end and I was gripped. You’re usually going to side with a narrator who is trying to come to terms with a missing child and missing leg, and you really do feel Erik’s pain. He begins to see his daughter in the trees and stalking outside his house. But is he really seeing her, or is he losing his mind? Or both?

There’s no blood and guts splattered over the pages here. Instead we have intense grief and loss which is a lot more painful and real. I had an idea where the story was heading but never thought it would go there.

For those who enjoy morbid tales then this is a book you should be checking out. It seems as though there is more to be unveiled in this world, too, which is a marvellous yet frightening thing indeed.

Like Loading...
‹ Self-publishing and How Difficult it is; A Kind of Guide (with pictures!!)
Book Review – Whispers in the Dark by Laurel Hightower ›