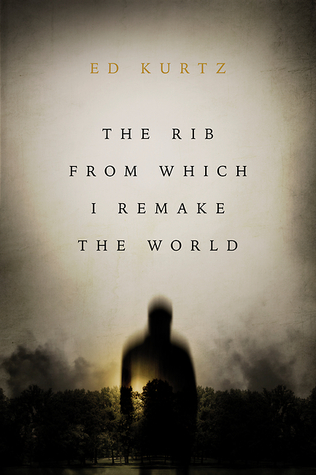 Ed Kurtz’s The Rib From Which I Remake the World is, in a word, awesome! OK, so it takes its time to get going, but even so there was never a feeling of ‘come on, get on with it.’ The setting of small town America during World War II had me engrossed from the very start. Although the war was happening thousands of miles away, the townsfolk felt it hanging over their lives all the same.

Jojo Walker, an ex-cop turned security man for the town’s hotel is just desperate for a smoke. His hunt for matches is a great way to introduce us the characters he shares the town with. There’s definitely more to Jojo than we are told at first, but don’t worry, you do find out about it all.

As Jojo settles down for a coffee and finally a cigarette in the local diner his attention is drawn to the strange film company taking residence in both the cinema, and later, his hotel. Apparently these weird carnies have been travelling the country with their weird-ass film. There’s something a little off about these people and their reason for being in Litchfield is somewhat of a mystery. Jojo doesn’t like them, and neither did I.

The pace kicks up a notch when a body is discovered in one of the hotel rooms. Well, when I say body, it would be more apt to say ‘parts’ of a body. The scene described is horrifying, and even our Jojo is shocked. As the reader we sort of know what’s happened but are not sure why.

Soon enough the residents of Litchfield have been enticed to the cinema to watch this sex educational film. It’s not what you’d call ‘classic cinema’ and not what they’d normally pay money to see, but there’s something almost hypnotic in the way they are drawn in. Subliminal, corporate marketing techniques have been around forever! Some of the patrons are then ‘lucky’ enough to be invited to the late-night screening, something altogether more sinister.

Of course, soon enough shit starts to go down and the town of Litchfield welcomes a host of terrifying horrors that threaten to destroy the town in the name of, well, evil! It’s up to Jojo and Theodora, wife of the cinema’s owner, to solve the mystery and save the town. Enter an ancient sigil of evil, black magic, and residents acting in a way very different to their normal behaviour. They’re kind of like a horde of zombies, but without the gore and brain-hunger.

And that’s as much as I’m going to say about the plot. I’d heard from other reviews that the ending was great, and I must concur. As I approached the last few chapters I was awed with how the story unfolded and the history of the town revealed. There weren’t exactly twists, as that would suggest something happened that was the opposite of what I was expecting. No, I didn’t have a clue how it would all turn out and luckily, it didn’t disappoint.

What a great little horror novel this is. I’ve heard people compare it to works by Stephen King, and been quite derogatory about this, but I have to say that I found it to have definitely more of an ‘well-influenced by’ vibe to it. The ‘small town with secrets’ scenario had me picturing the scenes directed in all their glory by David Lynch.

So yeah, a superb read, one that you really should enjoy for yourself, if only to find out exactly about Jojo’s past, shift uncomfortably in your seat while learning of the strange man who brings the film to town, and to stare in terrifying awe at just what Litchfield is hiding.

Like Loading...
‹ Ten of the Most Frightening and Sickening Bad Guys From 80s Cartoons
Book Review – The Sadist’s Bible by Nicole Cushing ›