Home › Uncategorized › Some Questions About Zombies

Some Questions About Zombies

Everyone knows how it works with zombies. They bite you and you get infected. The zombie disease flows through your veins and pretty soon you become one, stumbling around looking like a brain dead drunkard who hasn’t eaten for weeks, searching for the next alive person you can stumble upon to feast on and infect.

But I have some questions about this whole zombie thing, not that I’m expecting any answers, mind. Anyone who may be in a position to offer any insights from personal experience I’m sure is either already dead, rocking back and forth in a psychiatric ward, or trudging along muttering “brains” or some other part of a human they fancy eating. None are really that reliable.

So how long, for example, does it take for the infection to embrace your poor mortality? Are you instantly infected or does it take some time to manifest? There are cases (in movies, books, and comics I grant you, not in real life, as far as I’m aware of, anyway) where the victim lies there for ages, sometimes unnoticed by the other soon-to-zombified humans. Other times the change is almost instantaneous, giving the poor souls little time to escape. And sometimes the wounded victim pleas for the survivors to “do what they have to do” when the change comes. It would be advisable to put them out of their misery early, in my opinion, it’s much easier to plan an attack and/or escape when there’s not someone there moaning and whimpering as they die. I know, how heartless, eh?

Now if you look at zombies in the same way you look at any living creature (OK, I know they’re technically dead), then their main objective of survival (of sorts) is to eat. So how big are their appetites? When a group of zombies are feeding on a victim, pulling an intestine out here, and munching on a bit of arm there, with their rotting faces plastered with brain matter and blood, is their sole purpose to eat to fill their bellies? It would certainly appear so by the way they carry on.

Or maybe their purpose is actually to infect us humans, passing on their undead genes to create a formidable army of their own kind that will one day take over the world (I’ve heard of something like that before- Dead Snow, anyone?). If this was the case they’d probably have to save eating too much so there’d be enough left of the person to still function as a zombie. A little nibble on the neck would be all that’s needed. But I’m sure a zombie’s brain wouldn’t work like that, they’re hardly known for their sharp wit and detailed problem solving are they?

But if they really do need to satisfy a deep, primal hunger then surely there would be nothing left of the victim other than bones, and thus, no future zombies. Surely not. You don’t really hear of a zombie who’s a fussy eater do you? “Ooh no liver for me please, you know it doesn’t sit right in my stomach, and the migraines it causes…”

But biting a human in the neck and leaving them to die so that they will then come back to become a rival when hunting, is surely counter-productive. If all the zombies just left their partially-eaten victims to return as one of them then eventually, there wouldn’t be enough food to go round would there? If there’s too much competition for food then any species will eventually die out, I think Charlie Darwin said something about that, or something. So perhaps it is better for them to occasionally completely devour someone so they will have no chance of reviving. 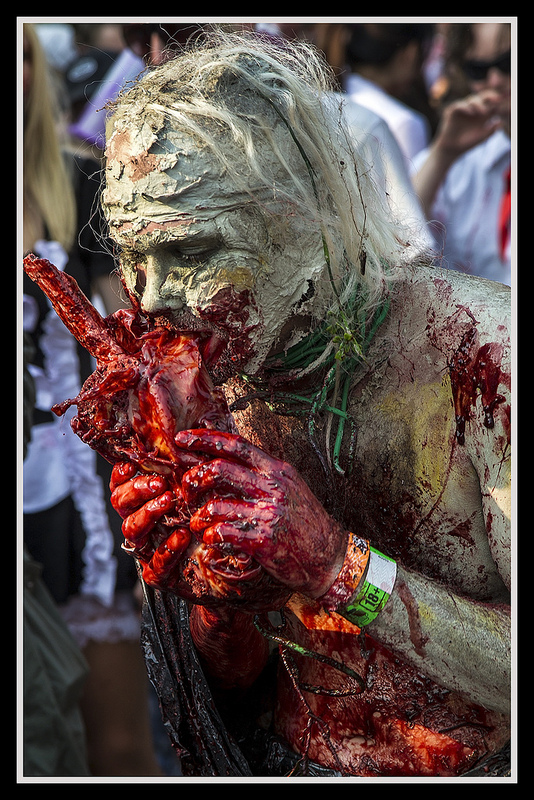 Do they ever get full? If so, facing a hoard of zombies who had just eaten and were full to bursting should mean you’re probably fine and able to carry on with whatever it was you were doing- trying to escape some zombies, presumably. Until they got hungry again, that is. Hopefully by then you’d be far enough away to not be the next human free-for-all buffet. A bit like, I suppose, coming face-to-face with a lion who’s just gorged on a buffalo and just wants to sleep. That’s another thing, do zombies sleep off a large feast like their living counterparts? Do they ever sleep, come to think of it, or do their brains not function enough to require replenishment?

These are all important questions.

Finally, picture this scene. You have been fighting on the side of the humans in the undead apocalypse for a few weeks. You’ve killed your fair few of them and now feel like you’re a bit of a natural. Your clothes are covered in dried blood and entrails, and your legs ache from the constant running and your arms from the perpetual decapitation swings.

But you’re getting hungry. All the food shops have been either cleared of any sustenance, the fresh food is now rotten, or the place is full of putrfying zombies who would be more than happy to add at least some of you to their rumbling tummies.

You see a zombie lying headless on the floor- it’s one of your kills and you look proudly down at your work. The legs, let’s say it used to be fitness enthusiast, look clean enough and there are no wounds or evidence of bite marks on them. OK, the body’s been lying out in the sun for a day or so, but it’s food. Your stomach screams at you to fill it, it’s not bothered about what with.

You crouch down and pull the leg towards your mouth, it’s pretty heavy but no problem for a hardened zombie killer like yourself, whose muscles are bigger and stronger than ever after the recent fighting. You bury your teeth into the flesh and rip out a chunk. It doesn’t taste too bad actually, OK it’s not a succulent steak that melts in your mouth, but it’s a meal. Afterwards you sit and rub your belly satisfyingly.

It’s taken me a while to get to the point here, but here it is, finally. After your well-earned snack, do you turn into a zombie? The meat has been infected, but does ingesting it yourself cause the infection to take hold in your own body, or does it only happen when you’re ingested? Interesting.

I can’t see the apocalypse coming any time soon, but you never know. And if it does, these are the questions you will need to be asking yourselves. Better to think about them now and not when your spouse/boss/child/etc is dawdling towards you with blood and hunger-saliva dripping down its ripped open and mangled torso.

Or perhaps, more likely, none of these questions will come to mind while you’re running away squealing like a little baby as the army of zombies cry out for your fresh, moist brains.

Either way, I hope these questions have caused you to consider these things. You can thank me afterwards when we’ve survived the end time.