Home › Uncategorized › Reading the Book after Seeing the Film

Reading the Book after Seeing the Film

We’ve all been there. We’re watching a film that’s based on a novel or a short story, and we’re thinking while we watch that it’s actually pretty damn good. We haven’t read the book but we enjoy the story, the acting, the direction, and the cinematography. The credits roll and we nod enthusiastically and murmur words of approval. We can’t wait to tell our friends about it and recommend that they watch it too.

When we then speak about it to friends or read others’ comments online, we find that we are in fact fools who will never get to experience the delights of the story as it was originally written. This select few who watched said movie after reading the book seem to take on an air of superiority over us poor wretches who never managed to read the book, or even knew that the book existed. They’ll boast how, in their inflated opinion, the film never matched up to the novel and that there are many more elements to the story that we missed, having jumped straight to the celluloid version.

“That actor destroyed his or her character.”

“They missed that whole scene out.”

“The set up wasn’t detailed enough.”

You get the picture.

But are we really missing all of these details? A well-made film that’s based, however loosely, on an existing story doesn’t need every last bit of information from the original source included to make the film enjoyable. A good director and cast will eliminate the need for these finer points in the tale.

So I recently, along with many many others, finished the latest season of Game of Thrones. It didn’t disappoint and throughout the season I read and watched many fan theories of what’s ultimately going to happen in the story. I’d never read the books, though but had heard so much about how great they are. If you love the show, the die hards said, you’ll love the books even more, they are everything that the show is, and then some! 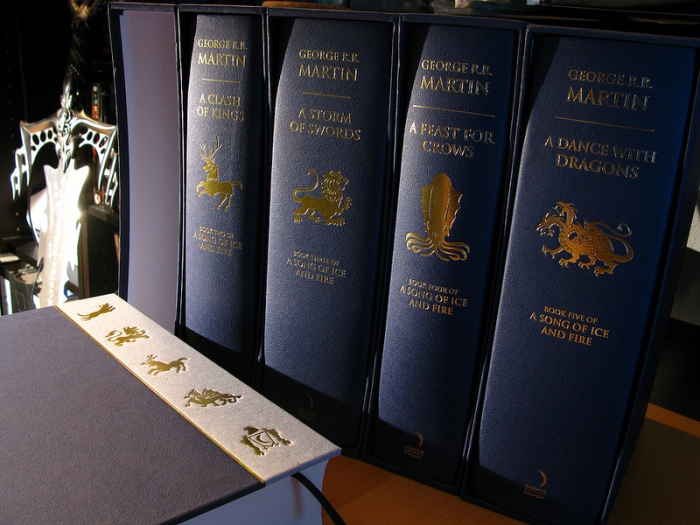 Now I’m currently half way through the second book in the series, A Clash of Kings, and am truly believing the hype. The whole world that Martin has concocted is utterly amazing. I find it breathtaking how one man can create a vast world of so many characters, places, and history, plus keep the whole thing coherent without any contradictions further on in the story. Now I may be yet to discover one, but from what I’ve heard there aren’t any.

But now that I’m immersing myself in the paperback world of Westeros I am somewhat saddened that I never read the books first. Although having a prior knowledge of the characters is helpful as there are so damn many of them, all the time whilst reading I’m picturing the actors and the scenes on the screen, almost nulling my own imagination that the words on the page should be fueling.

As there are countless movies and shows based on books, there’ll always be someone watching with an almost arrogant ‘it’s not as good as the book’ vibe about them, and maybe I’ve even been guilty of this at times. A film cannot even hope to translate every piece of a complex story within the time frame allowed and without boring the viewer with detailed character back stories. Sometimes a simple look on an actor’s face translates what takes two or three pages to describe.

But how many books have been, I won’t use the word ruined, by seeing the movie adaptation before hand? The most notable candidate for me is American Psycho. I saw the film when it came out and although I was familiar that it was a book and was about a psychotic killer, I felt that Christian Bale nailed it. He was American and a pretty superb psycho. A few years later when I finally read the book, all I had in my mind was the celluloid Patrick Bateman. Not that I didn’t enjoy the story, on the contrary, but making up my own version of the psycho in my head would have been much more satisfying. Although some of the gorey scenes described would never have made it into a big budget film, so I still have those to imagine in my twisted psyche.

I won’t go on mentioning all of the films that I read the book of afterwards, but a few notable examples of novels that I wish I’d found first include Fight Club, A Clockwork Orange, and The Hellbound Heart. Reading through these three, whose films virtually copy the novels, just made me want to watch the movies again. Although as I’m very familiar with all of them, it was as though I was re-watching them whilst reading. Kind of.

How many times do we re-read a novel after many years, to discover subtle hints to the character’s ending and their motivation, most of which we would have missed the first time around? For me, that’s what reading the book after the film is like. The scenes that were omitted from the movie play better in your mind, and ultimately make the pay-off that little bit more special. It can be just as satisfying ploughing your way through a book when you already know how it all ends up.

Obviously there are some films that change the ending to make the movie all smiles, perfect for the masses who prefer a happy finale. If you didn’t already know the book’s ending, this would be the perfect type of novel to read post film. Expecting the book to finish on a high, to be ultimately told that all’s not good in the world, is a great way to end.

So we need to Hollywood to base some new films on underground books that most people have never heard of, making the ending pleasant enough but keeping the viewer enthralled throughout. Everyone will rush out to read the original novel and discover that the author’s view of the story’s ending is a little different to the studio’s. That, would be my perfect post-film novel.

Tags: american psycho, films based on books, game of thrones, horror writer, not as good as the book, writer's blog