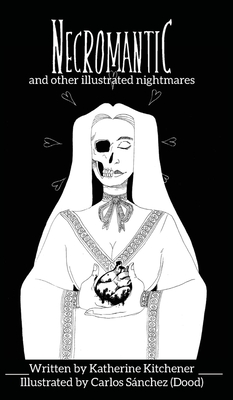 Found lurking within these pages are 12 short stories guaranteed to set the creep factor whirring. On the whole I had a great time with this one. Each tale managed to chill, and the writing was top notch, constantly driving the stories with a ‘ooh, what d’ya thinks gonna happen next?’ kinda vibe.

My one grumble would be some of the stories ended just as the seriously scary shit was about to kick off. This is just a personal preference, of course, and most may not agree with me. “Not everyone needs the horror to be spelled out for them, there is this thing called ‘imagination’, you know?” I get that, but a few scenes of insane depravity would have been welcome.

Anyway, what happens in these stories exactly?

The title track, Necromantic kicks things off, where a strange, sultry lady enters a bar and begins a seduction technique she’s seemingly been working on for many years. She manages to lure her latest victim to the graveyard and then into the depths below. Told in the second person, interestingly, the story is full of warnings from those who know exactly what’s going on. The descriptions are harrowing and part wondrous, part terrifying. This was a nice (if that’s the right word) way to begin things.

In Another Hungry Mouth, a young girl becomes pregnant and isn’t willing to divulge the details of the baby’s father. Things seem pretty weird with her during the pregnancy. When the baby is born he’s not eating properly and begins to lose weight, becoming somewhat of a mystery to the doctors. Eventually his hunger is satisfied, but not with simple boobs or baby formula. No, this baby is hungry for something else, and isn’t about to feed like normal little people either. This story built up to a monstrous body horror crescendo, and I loved it.

Statuesque was a story I didn’t really dig too much. A couple are driving along a deserted road and tensions are running high between them. When they notice a strange knife-wielding statue on the side of the road, one of the ladies becomes intrigued. When they later see the same statue (or is it?) lying next to the road, things seem too weird. The ending here was rather dark, without giving too much detail on what exactly happens next, but we can all guess.

The next story, Her Miniature Horses, is the tale of a lady who has quite the collection of My Little Ponies. To say this is an obsession would be an understatement. When she receives a message from a mystery person offering her the chance to buy a rare pony that was surely never even made, things sound too good to be true. It’s not a spoiler to say that they are. I find stories with emails and messages in the narrative really creepy, and the inclusion of these in this tale really added to the dark atmosphere. The lady receives said pony, but there’s something not quite right about it. I would have liked more of the aftermath here, but saying that, the ambiguous ending did serve the story well.

Small towns with their strange, ancient practices are such a popular trope in horror, and for good reason. In Nearly People, a young girl moves to a small town with her family. But in front of every shop, building, and school, are these weird models or statues of people; the nearly people. Legend has it these things, dressed in accordance with what they stand before (oh, and are faceless), are not to be messed with. This one was an uncomfortable read, in the very best of ways.

In Silk Bride, a group of ladies visit one of their party’s family home, a home said to be haunted. A night of drinking and ghosts is certainly not a hen party cliché, and these girls just wanna have fun before the looming big day. But alas, things don’t turn out well for one of their number. Is this place haunted, or are the ghosts very much alive and well? Content warning; there be spiders in this one!

Is the old lady who lives in that creepy cottage by the school a witch, or just a very old nun? In Sister Scavenger you are about to find out. The girls at the school all have a story to tell of her, as do the parents, as most of them attended the school themselves in the past. When one girl is sent on an errand to the nun/witch lady’s house, she finds out the truth. I was hoping she was just a sweet old lady, but alas, I was wrong.

Troll Queen was one of my favourites. A bizarre and graphic tale of one woman in an office transforming into a gigantic monster. The details of the beast were perfectly put across and some of the actions of the office workers were weird and amusing in equal measure. Why has the monster locked them in the office? Does she mean them harm, or does she wish to protect them?

Ever looked in the mirror and noticed your reflection not quite doing the same thing as you? Maybe it’s smiling when you’re not, or winking at you. In The Other Grace, this is exactly what starts happening. But it seems this ‘other’ Grace is not here to torment our protagonist, it seems like they get along quite well. This was an enjoyable story but I wanted some nastier ending, although I suppose that’s just my depraved mind. For others this might be a welcome, ‘easier’ story to calm after the previous horrors.

Under the Bed is the story of a dragon who lives under the bed. But this dragon only exists because the little girl whose bed it resides under, was scared about the monsters in her wardrobe. Her mom tells her the dragon would protect her, and thus the dragon was created. This one was OK, and was a cool idea, but it didn’t really connect with me too much. Perhaps if I had my own dragon I’d understand.

What We Found Among the Dunes was a great return to form. When two girls visit the beach and begin playing in the sand dunes, they make a discovery of some weird, giant bones. These bones are too big to be from a dog, and appear too pristine to be that old. So what are they? Whatever they are they soon become an obsession of one of the little girls. Her life suddenly changes when bad stuff starts occurring. Are these events really linked to their discovery? Yep, I’d say so.

Things are finished off with The New Girl. There’s a new girl at school, but there’s something very off about her. She’s travelled a lot with her family, moving from one town to the next all of her life. Why are her parents never around? Is there something stalking her? Is it a demon? I have a few questions about this one, but cannot state them without getting all spoilery on your ass, so I won’t. In a way I don’t want to know, because that just adds to the mystery. Either way, this was a great way to end things.

As I write this review, this book has no ratings yet on Goodreads. And that’s a real shame, because this debut collection of short stories is well worthy of some more love. And I haven’t even mentioned the illustrations yet. Each story is welcomed with a picture by the very talented Carlos “dood” Sanchez, and not only are they stunning and creepy, they encourage you to dive straight into the horrors that await you on the coming pages.

So come on, grab yourself a copy over on Amazon (US or UK) and share in the horrors from down under!