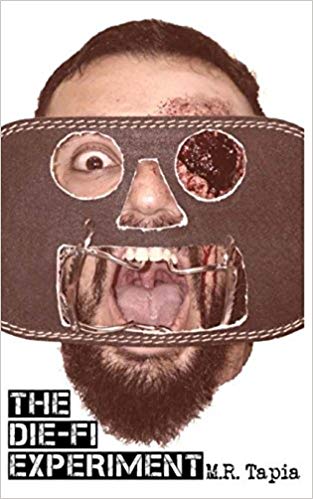 This gritty and terrifying novella is short on pages but definitely packs one meaty, gore-soaked punch. It took me little to no time to sail through it, and this was all down to the fast-paced and bloody action.

It can be difficult to portray backstories in novellas, and especially tricky to make the reader care about the plight of the protagonists; but M.R. Tapia manages both of these effortlessly.

The plot is simple; two newlyweds are the stars of a Japanese Reality TV version of Saw, with pain and suffering the name of the game. They are put through violent tasks by evil hosts while the world watches on with their smartphones and tablets. Instead of the stomach-churning games causing the police to be called, the fans and viewers simply lap it up. There are Likes and Thumbs-Ups aplenty.

I’m not an expert on Japanese culture and TV, but I’ve seen a few clips and realise that there is something pretty extreme and un-Western-world about their content. However, the show in question, The Die-Fi Experiment, goes beyond anything that would actually be broadcast (I think!).

The violence is brutal and bloody, the terrors realistic and shocking. But this isn’t just a bloodfest of depravity from beginning to end.

What the story does fantastically is switch between the now, where our main man writhes in agony, strapped to a chair while his wife is tortured in front of the world; and the then, telling of how the two met, and their plans of a shotgun wedding after a shocking personal situation befalls them.

I really got a sense of how much this guy worshipped his wife. As he says many times, he’d die for her. In only a few pages you get the sense that this couple are ‘real’ and as I mentioned earlier, this really has you on their side right from the off. Of course, a horror story with no sympathetic characters falls very short, so here the horrors are all the more creepy and squirm-inducing.

I read Sugar Skulls last year and in my review commented how M.R. Tapia’s writing style reminded me of the derisory view of modern life evident in Chuck Palahniuk’s work. Well I’m pleased to say that I got that impression from this book, too. The constant references to the plague that is social media add to the theme of Reality TV and, as is said, We, the human race, are only as strong as our Wi Fi signal.

It’s clever, as although the main character talks of his hatred of this world of virtual friends and hashtags and likes, he still maintains their use, much like many of us who would agree with these views, only to then Tweet our grievances about this epidemic.

If you want shocking torture with a sensitive side, then look no further than the brutal, bloody Die-Fi Experiment.