Home › book review › Book Review – Siphon by A. A. Medina

Book Review – Siphon by A. A. Medina 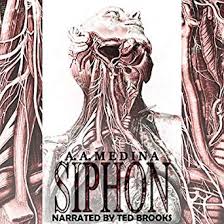 Siphon was a dark, disturbing read that I only appreciated exactly how disturbing it was once I’d finished. I’d read A A Medina’s collection of short stories, Itch, dug them, so decided the time was right to dive into his novella, Siphon.

Gary is a doctor. He works with blood. It sounds like a decent vocation in life, but Gary’s past still haunts him. Both his parents died when he was very young, leaving him to be brought up by his abusive, ex-military grandfather.

Gary is in a dark place. He hasn’t much of a social life and his main focus of attention is the beautiful Wendy, a co-worker. To say Gary is infatuated with her would be selling it short. His love for her borders on the psycho-obsessive.

When at work one day, feeling particularly shitty about life and his ball-busting boss, Gary drops a vial of blood for testing. Something awakens in Gary’s mind, or perhaps his soul, and before he knows it he’s tasting the blood he should be working on. An inner ‘God’ takes control and this is a feeling Gary likes. In fact it’s suddenly his motivation for existence.

Gary aches for that feeling and sets out to feed his lust. A story about a man obsessed with blood is going to lean on the gore-side of the spectrum, and this certainly doesn’t disappoint.

One thing this book did so well was getting you to care about the protagonist, Gary. He’s kind of an anti-hero, without being all that heroic. The pacing was great, there were no lulls in the action so it flew by me in just a couple of sittings.

The cast is very small, but any more characters would seem superfluous and slow things down too much. Who cares about anyone else, though, this is Gary’s story.

I suppose someone who craves the taste of blood would be considered a vampire, yet the term is never used in the book, and mentioning it now seems a little ‘wrong’. He’s more of a blood-junkie. With a craving for the crimson life-juice, Gary embarks on a mission to discover exactly what happened to his parents, and to get the girl of his dreams. Well, he manages to do one of these.

Siphon was a chilling, toe-curling experience, but in all the very best ways. Things build to an exciting climax (Gary knows all about those) that leaves you feeling a little bit icky.

This book is highly recommended although it’ll make you think twice about sucking the blood from your finger the next time you accidentally prick it on something. Luckily I read this on my Kindle so there was no danger of any paper cuts!