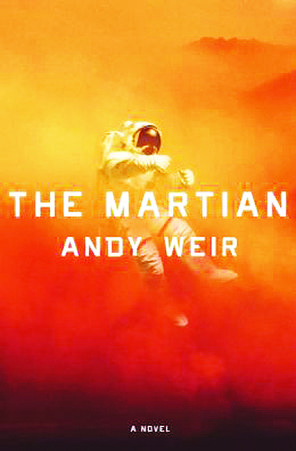 The Martian is not a story about a little red alien man from Mars, it’s actually about… OK, you probably already know what it’s about. There’s a film based on this book and everything, you see. Although I haven’t seen it I’ve heard good things about it and the novel from which it came. So when I saw this book in the charity shop for only £2 I thought I should check it out.

Well, on the whole I thoroughly enjoyed it. We start off with Mark Watney (The Martian; the clue’s in the title), having been left on Mars, presumed dead, by his crew, penning his journal. He talks of how fucked he is, but then begins to formulate a plan on how to survive. And he’s a pretty smart guy. Well, he’s going to be isn’t he? NASA don’t just send any old somebody up in space (I don’t think).

The novel jumps between entries in Watney’s log and events unfolding on Earth as those responsible for Mars and space stuff realise that he’s still alive. As Watney survives against all the odds the race is on for NASA to somehow save our unlucky yet plucky protagonist.

The journal entries are very scientific (well, he is a scientist I suppose); Watney explains in detail how he works out what he needs to do and why, and while some of the physics and maths may have been a little over my head I managed to stay with it. The meticulous planning he goes through to grow food, travel in the space rover, and maintain a manageable environment that won’t kill him is great. There’s also some nice touches of humour as he becomes more and more irritated by 70s TV shows and disco music.

Back on this planet, interest is starting to really hot up. The press are loving the drama, there’s daily news reports of Mark’s progress, and it seems that the whole world is right behind him in his bid for survival.

Now my knowledge of space travel isn’t what you might call ‘extensive’ but I wondered how realistic this all was. Could this really happen? Would a lone astronaut be able to make it out there without home cooked meals, a warm bed, and his favourite teddy? Well, it’s a novel, so I wasn’t too bothered about all that, I am quite capable of suspending disbelief.

But one thing I couldn’t get my head around was the way every one was willing to throw as much money as possible behind the mission to save him, and the fact that humanity as a whole was one big ‘Team Watney.’ Maybe it’s my Britishness, and if I were to be living in America I would be proud of the whole space exploration thing. But I wonder whether it did seem just a little over the top. I was reminded of the media presence in Gone Girl, after the girl is gone, with the media all over it like a rash. That seemed a bit overkill to me (would that many people actually care?), but hey, maybe I’m just too miserable.

I was either disappointed or impressed (I’m not sure which) at the way he seemed to keep his mind throughout. Eighteen months alone on a different planet is surely going to fuck with your head, but our Mark stays professional throughout. Perhaps that’s an idea for a sequel; man gets stranded on Mars and seriously loses his shit.

He gets rescued! It’s kind of obvious really, there wouldn’t be all this build up for him to burst his space suit and explode in bloody chunks right at the end. A best seller is not going to end on a downer. And don’t get me wrong, I wasn’t willing him to die, far from it. I liked Mark. Maybe I read too much horror (OK, not too much, that sounds like a negative thing), but I’m sort of expecting terrible things to happen in everything I read. That’s my bad anyway and not the fault of this novel.

And another thing I would have liked was a baddie; some bastard in NASA who was trying to sabotage the whole operation and save some cash. That would have brought the tension up a notch, because there wasn’t really that much, to be honest. I knew he was going to be fine, and that was with no prior knowledge of the book or the film.

I’m nit-picking now, and it’s not really fair because I really did enjoy reading this. These points are minor irritations and didn’t detract from the story. And I even learned some things; like how to survive on Mars. Although I may have forgotten exactly how. Make CO2 and get rid of oxygen? I think that’s the right way round!