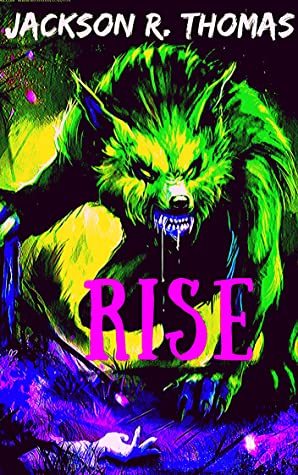 Last year I read Paradise, Maine by Jackson R. Thomas and really enjoyed it. It had gore, guts, and one evil beast intent on sadistically butchering anyone happening to be around. It was really great, so when the opportunity was offered to read Rise, I went for the jugular.

Many thanks to Glenn Rolfe for sending me a copy.

Now this is the second instalment in Thomas’ White Wolf series, and follows on from The Beast of Brenton Woods, a book I haven’t read. And I feel that this detracted from my enjoyment of this one.

Some sequels follow on from the original tale and presume the reader knows who everyone is and what happened previously. And although this book did do that, it still had elements that reminded people of the first story and what went on. These were well woven into the story and weren’t simply backsplaining.

Reading this I got a good idea of what went on in the first book, but the first-hand knowledge I lacked seemed to be the downfall of this story. Perhaps I’d still feel the same if I knew exactly what had happened previously, but sadly we’ll never know.

This is your typical werewolf tale. There’s the local town still reeling from a wolf siege six years ago now finding itself in the same place yet again. Locals fearful of the return of the beast and others profiting off the happenings. And of course the local police who will stop at nothing to bring this new monster down.

There was nothing ‘amazingly spectacular’ about this book, but I did still get some enjoyment from it. Lots of people die in horrific ways (which is always good) and the beast is given his human side when not rampaging the town in search of still-alive meat.

The novella blisters along at a great pace with very few lulls in the action. I’m not sure how many spoilers I can give, not knowing what happened in the first book (did I mention I haven’t read it?), so I’ll not be too specific.

The person who is the werewolf is suspected by the sheriff, and her quest to find him before he kills too many people is one I really got behind. Locals suspect who it is, too, and the family of the wolf-man are fully in the picture. There was some great tension as the wolf’s family member (I won’t say which one, as it could be reeking of spoilers) battles between knowing the true nature of the beast and seeing them as their – erm – family member.

As I mentioned some of the kills were nicely blood-splattered, as you’d expect. But without a thorough understanding of the town and its inhabitants, I felt myself not being too bothered when many of them were torn to pieces by a big, bad wolf.

Fans of werewolf stories and those who are familiar with the first book will dig this I’m sure. But although I enjoyed parts of it, I couldn’t really say that this is one of my favourites.

But what do I know, anyway?