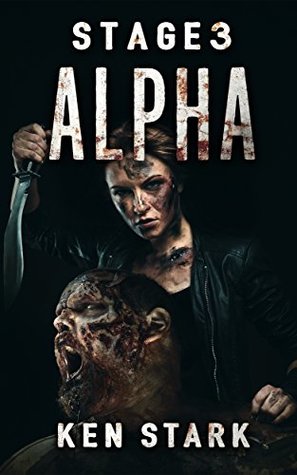 This book is the second in the Stage 3 Trilogy and in my opinion, it blows the first out of the rancid, putrefying water. Last year I read the first instalment in this zombie, post-apocalyptic world and really enjoyed it. If only there was some way of finding out what I thought, eh? Ahem, right here!

In the first book we followed Mace and Mackenzie as the two tried to make it in this terrifying new world. All they wanted to do was find young Mackenzie’s Aunt Sarah; a task that seemed nigh on impossible, what with everyone turned into a blind, homicidal maniac with a hunger for living tissue like it was going out of fashion.

Well here we follow the aforementioned Sarah and her fight for survival. And what exactly is her driving force in this quest to live each day as it comes? That’s right, to somehow find her little niece.

It may sound cheesy, but the impossibility of these two finally meeting never seems out of the question. In fact this desire of Sarah’s to be reunited is presented so well that you’re with her every blood-stained step of the way.

Sarah was at work as a nurse when the crisis began. These zombie-type beasts were referred to as ‘Alphas’ and displayed blindness and exceptional hearing. And ravenous bellies, of course.

The book wastes no time in thrusting you right into the action. Whereas in the first book the infection was introduced as the main character, Mace, tried to work out what was going on. Here, though, the reader already knows the score, so on the very first page we see desperate survival tactics, while monsters search for their lunch, drooling and gurgling.

These alphas are no undead, though. But if you encounter them and do have the audacity to actually kill them, they become zombiefied pretty sharpish. These new beasts Sarah terms ‘Echoes’.

Many zombie novels seem to involve scene after scene of battles and killings between the survivors and the many, many antagonists. But here, yeah there was plenty of that, but the gore did seem a little less frequent than its predecessor. Perhaps there was more than I first realised, but the plot is so engrossing that that’s what kept me hooked.

Sarah turns into one serious badass, and quickly. I suppose she has to, though. Before long she’s befriended a dog, acquired a big fuck off sword, and even has a plan of action.

She finds, after hours of careful journeying through the streets and hiding where she can, an apparent safe haven. A large banner indicates this vast shopping complex is housing other survivors. Finally, she is taken in by them.

But if you’re acquainted with post-apocalyptic fiction, you’ll already know that survivors don’t tend to be the most friendly guys around. And this new ‘life’ she finds is run by a vicious dictator with no real empathy for his ‘people’. These guys are terrible, but Sarah handles them just fine.

Like I said earlier, the plot here is what brings everything together. The descriptions of the carnage outside, as well as the social dynamics and ‘politics’ inside the supposedly safe place, really put you bang in the middle of this desolate place.

But nowhere is safe with alphas and echoes swarming the streets, and before long this hideout comes under attack.

That’s as much as I’ll say about the plot, as I don’t want to give anything away. As there’s another book in this trilogy you can imagine that people from this and the previous one will survive. But there are some genuine surprises here, one being especially shocking, and not just for shock’s sake; it really feels like it could happen in this world.

There’s nothing really groundbreaking and new here, but that doesn’t matter; in fact it makes the story stronger. Instead of trying to reinvent the P-A genre, Ken Stark has woven a gripping tale with the undead as supporting artists, but the humanity ultimately driving the novel.

This is one to check out, but only after you’ve finished the previous book, duh!

Book 3 will be soon be consumed and the review will follow, like a hungry zombie stalking some crazy living guy, or something.