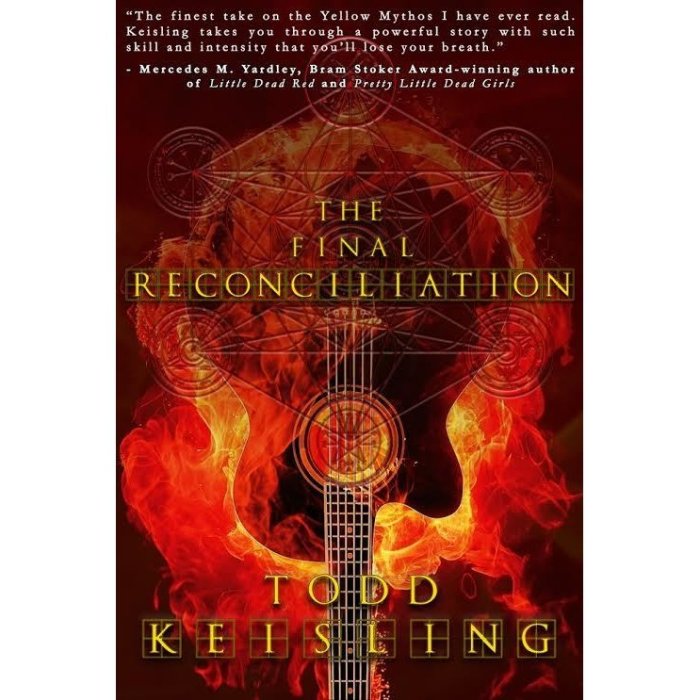 I’m not really a massive book reviewer, but I’ve recently got through a mighty stack of top notch reads that I feel obliged to share my thoughts about them. A holiday in the sun is a perfect backdrop to read horror. Feeling said sun burning away your flesh while you relax by the pool, too engrossed in a book to even think about applying a bit more sun cream, is a rather cathartic sensation. Plus it beats being at work!

So anyway, intros aside, the first book to entertain me whilst sipping on my rapidly warming beer was the most excellent The Final Reconciliation by Todd Keisling.

Now I don’t want to sound all fan-boy straight off the bat, but OMG OMG he just sooo understands me, it’s like Todd has written this book just for me, ooh I’m in love!!!

OK, so my love for the book isn’t that demented or stalkerish, but the ingredients here are pretty much exactly what floats my boat. Lovecraftian madness-inducing horror told through the story of a metal band. And they’re definitely metal and not just rock, the drummer plays double-kick!

Keisling obviously knows his genre (music one, that is). I lost count of how many times I threw the metal horns whilst reading. The references to Slayer, Opeth, Mastodon, Tool, Al Jorgensen; yes, yes, yes, yes, and yes!!

But it’s not just the musical references that kept me reading, the story is just fantastic. There’s definitely enough there for the non-metal-loving horror junkie to get their ravaging teeth into.

The tale is told by Aidan Cross, the last surviving member of The Yellow Kings (RIP – literally). Things were going well for the band, they were making a name for themselves in the live circuit, their EP was well received, it seemed like the world was theirs for the taking. That was, until they met Camilla.

She meets the band after a show in Texas and takes an instant liking to singer, Johnny. The band don’t take her too seriously at first, seeing her as just another groupie gypsy-type, but soon she’s right there on the tour bus, headed to the next show. Blame Johnny for this!

People may say she’s the most disruptive female to interfere with a band since Yoko Ono, but think more Jeanine from This Is Spinal Tap, with the ideas for the stage show and band policies, etc. (It’s your fucking wife!)

To be fair, the rest of the band have a go on her, too, including Aidan, albeit sort of against his will, but it’s Johnny she really has eyes for.

Aidan recounts strange dreams where faceless beasts haunt his mind, seemingly implanted there by this groupie-bitch. I won’t divulge what he sees, it would spoil the magic of reading them for yourself, but they are definitely, how you say, fucked up! It seems that something very strange is down with this woman. And indeed it is.

The story is being related to a journalist and the fact that the terrible event that ended this bands careers and most of their lives is already known to the reader, makes the fear for the eventual outcome that much more terrifying. It’s classic Lovecraft in this respect, a troubled soul reliving an awful atrocity that shook their world and caused them to live in emotional agony for the rest of their life.

The book foreshadows the last show the band play, a set of their, as yet unreleased new album. Johnny has written the music, with more than a little influence from his new girl. When the band begin to practice the songs things seem great. The new stuff is killer, better than they could imagine. But Johnny, complete with his strange and poetic lyrics, prevents them from playing too much of it at once in the studio. It appears that to play the whole thing in its entirety needs to be saved for that show.

The infamous final show is organised by Camilla who chooses the venue and designs the stage set and band costumes (red robes and white masks, not quite the astrological costumes put forward by Jeanine to ‘Tap). A large number of fans and journalists are invited along and are all given a strange mask to wear.

Obviously I’m not going to give specifics about the ending, but you already know that it’s all leading up the band’s final and terminal show and that it’s not going to end well. But really how bad is it? Well, pretty fucking brutal!

So there you have it, read it. If you like metal or horror you will love it, if you like both, well you’re in luck!

Thanks for reading, I’ll be back with another holiday review pretty, pretty soon!!