As far as ways to exercise go, running is up there with the simplest and most rewarding activities. Not only do you get fitter, have greater stamina, and increase your endurance levels, you also get a good time to think.

Maybe you need to reflect on that project that’s due in at work, or maybe you need to chill out after that argument with a loved one, or perhaps you want to consider the best place to take a holiday this year. Or maybe you just need to plan the best way to extract those teeth from that annoying, whiny victim that just won’t stop writhing about despite the constant threats you’ve been making, but they just keep going, like they think that someone will actually hear their pathetic cries from the sound-proofed basement. Sometimes it seems like I’ll never get them out, I probably need to treat myself to a pair of smaller pliers. Or a sturdier vice.

Sorry, what was I on about again, went off on one there.

Recently I’ve started to ‘get the running bug’ and I’m almost frightened to say that I may be getting a bit too much into it.

Annoyingly I’m one of those runners that started in January, not to lose any Christmas weight, though, I suppose I’d just been putting it off for months and kept telling myself that I’d wait until the new year. Well, 2017 is already passing us by but I’m pleased with myself that I have thus far stuck to my (not original) goal.

And now here I am, a fully fledged member of the running community. Kind of.

I’ve found it’s good to give yourself half an hour or so away from the kill room, the screams can get a bit tedious after a while, plus I feel like I need some time to myself to dream up new torture tactics and the like. OK, so my muscles ache and I limp around for a day or so afterwards, but I’m feeling pretty, pretty good.

So as I’m now part of this new club, I now watch what I eat, turn my nose up at smokers and unhealthy eaters, and generally look upon myself as somewhat elevated above these non-runners. Ha, no not really. In fact I like to think of myself as a sort of ‘anti-runner’, if you will.

No, I don’t wear special tights, or reflective bands, or my phone on my arm. In fact the only reason my phone is with me is so I can listen to music. Not only does the fast-tempo’d metal help me to keep going, it also covers up my wheezing that does occasionally break through between songs. I can see why I get those strange looks from pedestrians as I hobble past them. And speaking of phones, I don’t have any of these apps that track my progress or give me specific goals to aim for. No, I run the same route a couple of times a week, one that takes about 30 minutes and gets me knackered, and that’s it.

My running uniform consists of trainers and tracksuit trousers (couldn’t really get away with anything else) and my favourite Gwar t-shirt (it’s white, so that’s how I avoid having to wear reflective or flashing bands on my person, and it seems to have worked so far, ie. no car has made me dead from not seeing me).

My headphones are stealthily positioned under my hat with the lead hidden under my t-shirt. I’m not one for the ‘hey look at me I’m into my music’ recording studio-style satellite dishes on my ears that seem so popular these days. I’m sounding quite bitter about those, I could go on about them, but I’ll spare you that rant. 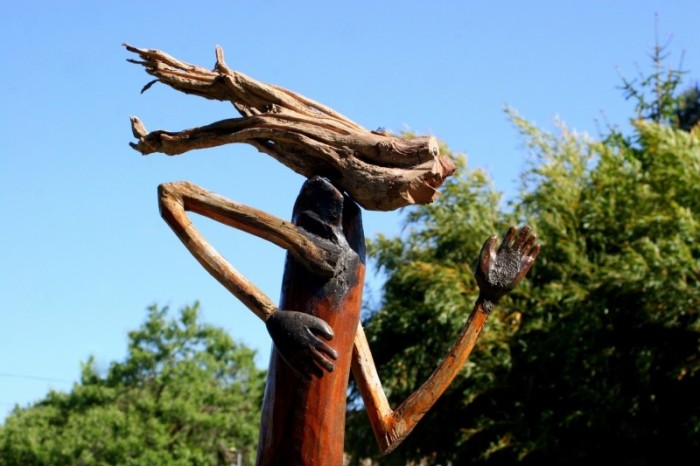 I’m told that ‘my people’ (runners, I mean) are all one big family and we are supposed to acknowledge each other as we pass. At first I was keen to embrace this part of family life. However, during my initial outing I managed to say ‘hi’ to someone running in the opposite direction to me, and was a little surprised at his reaction. I don’t know what he said (Darkthrone was in my ears) but his face wasn’t all that friendly, to say the least. But as I crossed the road and looked behind me, it all made sense. He was running to catch a bus. He might have been dressed like on of ‘us’ but he definitely wasn’t out doing what I was doing. So no wonder he took exception to some weirdo with a beard and a belly saying ‘hi’ to him.

Not to be deterred from posing as one of the ‘community’ I spied a young lady running towards me from a distance. I stared at the floor, trying yo look cool and definitely not out of breath, as we approached each other and only looked up at the last moment. I smiled through a grimace, and said ‘hi’ again. As I muttered the word I noticed that the lady wasn’t a lady or even a runner at all, she was a small girl running towards her mother. The look that the girl’s mother cut me shall haunt me for days. Like I said, belly and a beard, parents don’t like people like me saying ‘hi’ to their kids.

So best not try to engage anymore, I’ll just keep my head down and keep to myself, it’s much safer that way.

When I’m not running (so the vast majority of the time) and I see one of my ‘brothers’ or ‘sisters’ or ‘uncles’ or ‘second-cousins’ or ‘great-aunts’ (runners), I do tend to think the same thing I did before I joined them. It’s usually something along the lines of ‘look at that idiot in their spandex, what a loser.’ I’m sure that most people think the same thing of me as I shuffle past, and they’d be right. Although I’m pretty certain that they won’t be watching me whilst picturing me strung up on a butcher’s hook in their basement.

So even though I’m a fully paid-up member of this exercise-society, it seems I’m a good way off becoming some sort of ambassador for them. If I’m still running in six months my views may change.

Perhaps I’ll write another one of these in a few weeks, a comprehensive guide to running. They’ll be tips on nutrition, on pacing yourself, on the best outfits to wear, and so on. But probably not. I’ll leave that to the serious blogs, there’s loads of them, check em out!