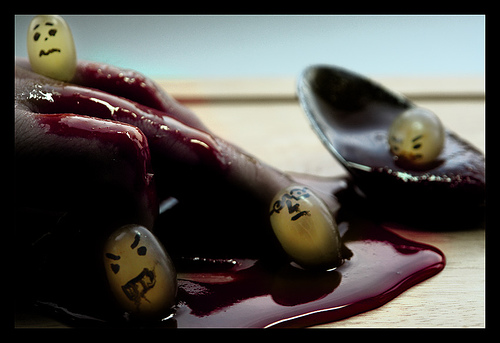 He’d been stranded in this dark prison for what seemed like days, but only now did Kenny’s eyes seem to adjust to his situation. There were hundreds of them there, packed together like sweaty canned sardines. Kenny could feel the warm, nervous breathing from another who was lying almost on top of him. There was grief surrounding him, the sound of an army of terrified men resigned to their fate. Kenny could make out none of the faces but was glad of this. No doubt their expressions would have mirrored what his was surely exhibiting.

The large chamber suddenly shook as if a giant earthquake had hit outside and panic swept through the hoards of prisoners like an invisible mustard gas of fear. A deafening whirring sound began and Kenny desperately slapped his hands to his ears to keep it out. The room began to rapidly heat up and Kenny felt the smouldering flesh around him on his nostril hairs.

Then the screaming began. In moments the apocalyptic hammering from outside was all but gone, now covered by the barrage of audible suffering from inside the ever-expanding walls. The ceiling was getting higher, disappearing from Kenny’s view as the seconds passed. His skin was tightening, pulling his lips apart which brought a guttural cry from the pit of his stomach. His throat grinded like metal on metal.

An explosion silenced some of the death throes. Then another came. Then another. It sounded as though they’re prison was being decimated. Kenny lay flat on his back, trying to ride it out, as stupid as that seemed, if he’d had the inclination to think about it.

The man who’d been breathing on him let out a pained cry as his hair turned to fire. Seconds later the man exploded, his crimson and lumpy innards sent flying into the air like he’d been stamped on by an invisible giant.

Then suddenly the violently-sprayed molten blood and chunks just, well, froze. It was as if time had been paused. The man fell to the smoking ground with his exploding viscera suspended in mid-air around him. Next to the dead man was another who’d suffered a similar ending, this one’s brains were hovering around his head like a fleshy halo. In fact, as Kenny’s eyes quickly surveyed the scene he saw that everyone was inflicted with the same horrific fate.

Their bodies and spilled insides were piled even higher and the smell of cooked meat made Kenny want to gag. He could feel the heat inside his own chest now, like his organs were boiling to the point of destruction. He tensed his muscles, hoping that it would pass but was really just trying to prolong the inevitable.

And then it was over. A thunderous ping attacked his eardrums and silence surrounded him. After a few seconds was another, this time more muted explosion, followed by two more. The walls of the prison seemed to deflate and Kenny lay still, silently praying thanks that he had been saved. How he had survived, he would never know, but it was a good feeling.

The hungry man took the bag from the microwave and poured his warm popcorn into the bowl, licking his lips. There was only one kernel that hadn’t popped which annoyed him somewhat, he liked those ones the best. The hungry man’s teeth crushed down on Kenny before the sole survivor had time to scream.