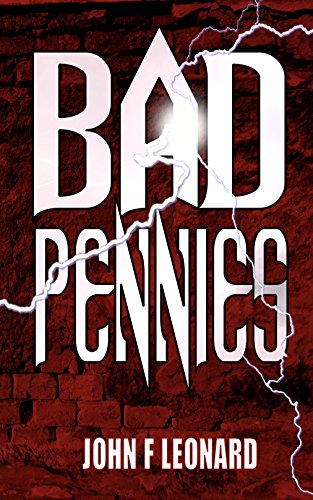 When a book’s title has the sub-heading ‘A Supernatural Horror Novel’ my interest is always piqued. Add to that the promise of a whole new mythos inside (this one’s entitled The Scaeth), I’m practically salivating like a cannibal in the wake of a nuclear aftermath. Sometimes I’m left disappointed, but this time? Definitely not.

John F Leonard has composed a corker here! Labelled as part of the Scaeth Mythos, the only disappointment I had was that it’s a recent book. Meaning I can’t go and blitz through all the other volumes in this terrifying saga. If this had been written, say 10 years ago, there’d be plenty of other titles to get my teeth into. But if that’s my only complaint, this one must be pretty darn kick ass!

So what’s going on then? Well, upon finishing the book I re-read the introduction from the author. It put it better than I ever could, but here goes anyway.

Chris Carlisle is pretty luckless in life. A shitty job, a shitty flat, a shitty bank balance, and a (not shitty, but not great either) relationship with his parents. In fact the only shining light in his existence is his wonderful and beautiful girlfriend, Becca. Chris can’t believe he bagged such a hottie, way out of his league, but she’s really into him. It makes life worth living.

It’s these feelings he has for his girlfriend that drive the story on and stop you thinking ‘what a loser’ as he assesses how dire his life generally is.

When a van knocks down a mysterious man in black, Chris is the only witness. The horror of the crash seems to ingrain itself in his psyche and he can almost taste the death in the air. But then he notices that the man has dropped his wallet, although it was probably the last thing on the man’s mind as he was thrown throw the air like a sodden bag of bones. It seems so easy to just grab the wallet and run. But Chris is a good guy, should he really do such an immoral thing?

Before he’s had chance to think about it, the wallet’s in his pocket and he’s off to the aforementioned shitty job.

There’s something weird about the wallet, though. It’s exquisite in design and seems very expensive. But it’s the weird, clandestine logo on it that brings a feeling of disconcerting dread to Chris. He manages to put these thoughts from his mind, though and takes out the sizeable wad of cash in there. Come on, he’s broke, wouldn’t you do the same?

This is where Chris’ journey takes a strange turn. The wallet replenishes itself with fresh money every six hours. After not very long at all, Chris is sitting on a rather large pile of cash. He still feels bad about what he did, but at this rate he’s going to be a multi-millionaire in a couple of years.

I suppose he should have known that this ‘luck’ would come at a price, though. Shit, a creepy voice in his head from an unknown source basically tells him as such.

And so we are introduced to The Scaeth. A demon, an alien, a monster; whatever he is, he exists in a different world to our own, one littered with the bones and screams of his victims. Portals to this place appear to Chris who believes he’s actually going insane. Then there’s the cat that appears on his doorstep, watching him with eyes more shifty than a cat’s usually are. Or is it a furry spider hybrid-type thing? Whatever it is, it’s got big teeth and tentacles, and is scary as shit!

The grimy, run-down parts of town, as well as Chris’ flat, are described in such detail you can almost smell the squalor. As for the openings into this other world; harrowing is a good word.

This was a great read and is well recommended to those who enjoy – er, supernatural horror. The realistic setting and characters add to the atmosphere, so much so it seems as though these things of nightmares might not be a million miles away from our own world. Frightening stuff indeed.

There is a lot of humour in here, too. Although a lot of the similes and thoughts of Chris are, in another context, chuckle-out-loud funny, I found myself too engrossed in the horrors of the story to actually laugh. And that says a lot.

Top marks, I can’t wait for the next instalment!

Like Loading...
‹ Six Things the Amateur Writer Should be Doing
Book Review – The Girl Next Door by Jack Ketchum ›