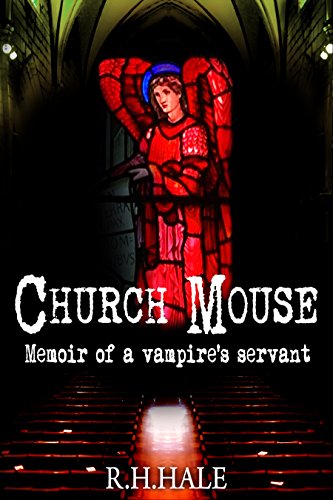 When I see a book described as a vampire story, I immediately think Anne Rice or Twilight and am slightly dubious at the thought of reading it. Which is silly really because, when I think about it, I enjoyed the hell out of Dracula and Salem’s Lot. But still, there’s that nagging feeling that the vampire story is more about the romance of these beings instead of the full-on horror that feeding on human blood actually entails.

Well, the creepy promo video on R.H. Hale’s website sets the tone perfectly for this harrowing tale of bloodlust and madness.

Rona is a girl in her twenties with very little in her life. She has no job, no parents and, very early in the story, no home. She suddenly finds herself with a place to stay and a new job to boot. Sounds amazing, right? Well not entirely, as her home is a gallery in the freaky church she’s frequented since childhood, and her job is now (it says it in the title) working as a servant for a trio of vampires.

As a child Rona encountered these beings in the church, although she never met them per se. She spoke to one through a locked door, who then proceeded to mutilate some of the kids who used to tease her. It seems she was to be forever in their debt.

This book sank its teeth into my jugular and wouldn’t let go. To say ‘slow burner’ feels a little cliché, but the writing style really drew me in and put me right in the mind of the ill-fated Rona. The narrative is told as a (duh) memoir, where Rona addresses the reader on multiple occasions and asks rhetorical questions; it’s as though she’s there telling you her story in person. This personal, intimate storytelling only served to heighten the tension and eventual horrors.

And then there’s the vampires. Two guys and a gal; Serge, Hector, and Edith. Serge is the boss, and his character was a joy to read. A charismatic leader who carries an air around him that you certainly wouldn’t want to mess with, he takes Rona under his wing (bat-wing?) and treats her, well kind of nicely actually. Although there are brief flashes of the monster that lies beneath the human-looking form, and Rona is well aware of these.

She’s a pretty good servant really, although she has to be, as any messing around and not only would she be sacked, she’d also be quite dead. Her chores include cleaning, booking taxis for the trio to go out and hunt, and partaking in the removal of vamp victims’ personal artefacts; we don’t want no police snooping around!

It all sounds great so far, no? Well it’s not just the day-to-day workings of a vampire three-piece on display. Rona slowly becomes privy to more information about their ghastly antics than she’d want. Her descent from Rona to an empty, emotionless, used-to-be-Rona is expertly handled. There’s a real unnerving character development that is so subtly handled you kind of don’t notice it as you go along. She’s consumed by their existence, kind of like I was consumed by this tale.

Another thing that was really great about this book was the scares, which is what you want if you’re picked up something labelled ‘horror’. The church, for one, is frighteningly described, especially the locked cupboard leading to the passages below, as well as the subterranean Great Hall filled with possessions of victims from centuries gone by, and the death pit where the bloodless bodies are finally dumped. I swear my Kindle reeked of decay while I read.

And then there’s the descriptions of the vampires, Serge in particular, when he goes full-on vampiric. Wow, terrifying. Rona gets to witness the full force of his power and it’s full-on pant-soilingly brutal.

There’s plenty of gore, plenty of creepiness, and plenty of utter madness-inducing scenes where Rona really loses all sense of herself. What she goes through is horrific, but she really has nothing else in her life, so maybe it’s not so bad?? OK, it is!

This is the first novel in a trilogy and I’m now hooked.

It’s a vampire novel with a real and believable descent into insanity, with certainly no vampiric mush, and I loved it. I’m sure you will, too.

Like Loading...
‹ Book Review – The Cold by Rich Hawkins
Souls Will be Consumed on August 22nd; The Mind’s Plague is Upon You ›