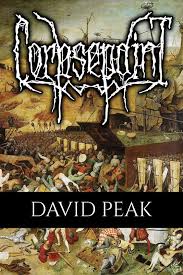 As soon as I heard about this book I knew I just had to read it. A Lovecraftian-esque supernatural horror novel about a black metal band? Shit, two of my favourite things in this fetid existence on a desolate planet of pain and suffering. Then I read the synopsis and I was salivating with full Transylvanian hunger!

So a black metal artist, Max, who almost redefined the genre with his band’s first 3 albums, is getting a bit tired of the fanboys creaming themselves over these albums. He just knows he’s got something better in him. All is set for a comeback record then. He just needs to kick the smack and get in the studio, and actually write some songs.

Enter Roland, a very talented drummer and songwriter who is hired by Max to help record this as-yet-unrecorded masterpiece. The record label are even paying them to be flown to Europe (the spiritual home of black metal) to make the album. The only problem is it’s in the secluded woods of Ukraine, and the band who own the land are kind of infamous, to say the least. There’s stories of murder in those there woods.

I’m just going to cut to it now, this book was amazing! We follow Max, whose vices for drugs and alcohol still control him, and Roland, a guy who has seen his fair share of shit in the past but is in far too over his head, as they head to the remote woodland compound. Think The Ritual by Adam Nevill, or The Blair Witch Project, or The VVitch, that kind of creepy vibe was ingrained in my mind as the pair were introduced to the nihilistic, fuck-your-rules-I’m-living-in-the-woods ‘locals’.

Things go downhill. Well, of course they do. What, you thought they would record the album hassle-free then head home and live off the fame and royalties? OK, I know you didn’t think that, if you wanted to read reviews of books where happy stuff happens you wouldn’t have read this far, right?

The second half of the book is where the terrors come to life, much in the same way as in The aforementioned Ritual. But whereas that book became more black metal, this one becomes less so. And I’m not complaining, for as much as I was enjoying the references to Judas Priest, Maniac, Wacken, and Darkthrone, once the terrifying cosmic horrors appeared I was engrossed too much to care.

That’s enough about the plot, I don’t want to spoil it. This book perfectly captures the essence of black metal; the hostility of the music and the musicians, the folklore and ancient deities, the background of pure nature without any corporations sticking their capitalist noses in; it has obviously been written by someone with a detailed knowledge of the scene.

That’s not to say that only black metal fans will appreciate this. In fact there’s no need to know anything about it to get into this book, everything’s explained to you. There are so many horror moments and creepy settings that would work in a book about 80s electro-pop musicians, or something. But black metal is one of those genres that is so interesting on it’s own, even if you don’t dig the music (I know I’m biased). There’s many a time I have told a non-metaller to look up the history of Mayhem (The True!) on Wikipedia and read through what went on with them. You couldn’t make it up.

This was the first black metal-inspired novel I’ve read, I’m sure there are more (comment if you know any) but if not, I find it bizarre why it’s not a horror fiction sub-genre in itself. I waffling now, back to the book. Erm, just buy it!!!

Like Loading...
‹ Ten Tips For Naming Your Book
Book Review – The Abyss Beyond the Reflection by Micah Castle ›